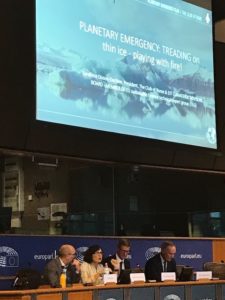 Club of Rome Co-president, Sandrine Dixson-Declève, reiterated the urgent need for transformational action on climate change, biodiversity loss and human health and well-being at an event co-hosted by GLOBE EU, The Club of Rome and the Ellen MacArthur Foundation at the European Parliament on 15th October.

Speaking on a panel alongside security expert, Tom Middendorp, MEP Sirpa Pietikäinen and Joss Blériot from the Ellen MaCarthur Foundation, Dixson-Declève was honest in her appraisal of the state of play: “Time is up”.

She noted that the sense of urgency has for too long not resonated beyond expert circles and that to confront the Planetary Emergency head-on, a strategic, joined-up approach is critical: “We need new champions. We need the unusual suspects. We need to be strategic and smart, and ask ourselves how we can cross-fertilise to achieve our common goals”.

She also pointed to the unprecedented opportunity at EU level to influence the direction of the European Green Deal and infuse it with the emergency and transformational thinking it so desperately needs, saying: “We have an immense opportunity at EU level as the new European semester begins. The Club of Rome’s Planetary Emergency Plan can be a reference point for the new European Commission to deliver the European Green Deal”.