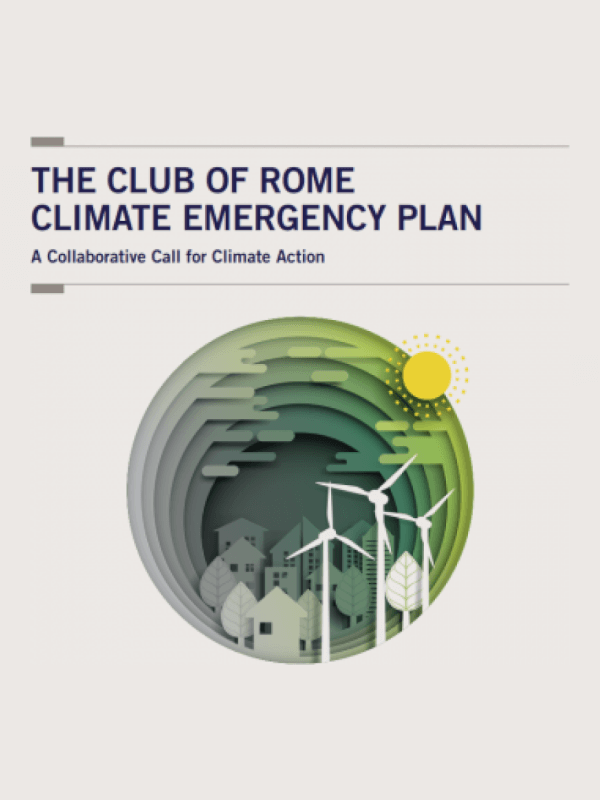 Climate change is the most pressing global challenge, constituting an existential threat to humanity. The Club of Rome – Climate Emergency Plan sets out 10 priority actions for all sectors and governments, and is an urgent wake up call.

The recent IPCC report emphasises that climate-related risks are significantly more dangerous to human life and to the systems that sustain us at 2oC warming compared with 1.5oC. Yet global action is lagging, stymied by political meandering. To avoid the worst outcomes, global carbon emissions must be cut by half by 2030 and to zero by 2050 – an unprecedented task which requires bold and compelling action. The Club of Rome – Climate Emergency Plan proposes ten action points to achieve the goal set by the historic Paris Agreement, aligned with science and economic pragmatism, to limit temperature increase to 1.5oC.

To avoid further collapse of environmental, political and socio-economic systems, urgent leadership is required now from governments, industry and citizens. Climate change is no longer a future threat. It is already affecting billions of people across the globe and every economy. Annual losses for the US alone will reach hundreds of billions of dollars by the end of the century, according to the new US Climate Assessment and continued climate related impacts could create 140 million climate migrants globally by 2050.

The Club of Rome in its seminal 1972 report The Limits to Growth alerted the world to the environmental and demographic challenges. The central message was that the quest for unlimited growth in population, material goods and resources, on a finite planet, would eventually result in the collapse of its economic and environmental systems. That prediction is clearly manifesting in the climate change crisis awe are confronted with today.

Our historic recognition of the existential nature of this threat, the need for an emergency response, and the opportunity such planning can present, is the unique contribution which the Club of Rome wishes to bring to this debate. We are calling on governments, business leaders, the science community, NGOs and citizens to rise to the challenge of climate action, so that our species can survive and create thriving civilizations in harmony with planetary boundaries.

Acknowledgement of these implications creates the basis for a societal renaissance of unprecedented proportions. This requires swift action and the collective implementation of one of the most comprehensive emergency plans ever contemplated. The Club of Rome believes that such action, difficult as it may be, will create a much healthier, happier, safer and innovative global society.

The Climate Emergency Plan of the Club of Rome was launched on December 4th 2018 at the European Parliament. You can download the full report here.