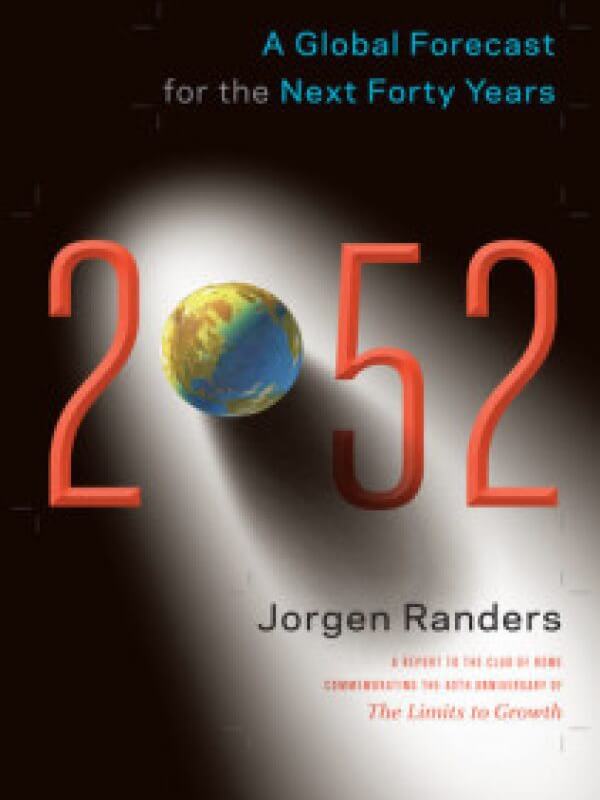 Published 2012 – Forty years ago, The Limits to Growth addressed the question of how humans would adapt to the physical limitations of planet Earth. It predicted that during the first half of the 21st century the human ecological footprint would stop growing-either through catastrophic “overshoot and collapse”-or through well-managed “peak and decline.”

So, where are we now? And what does our future look like? In the book 2052, Jorgen Randers, one of the co-authors of The Limits to Growth, issues a progress report and makes a forecast for the next forty years. To do this, he asked dozens of experts to weigh in with their best predictions on how our economies, energy supplies, natural resources, climate, food, fisheries, political divisions, cities, psyches, and more will evolve in the coming decades.

The good news: we will see impressive advances in resource efficiency, and an increasing focus on human well-being rather than on per capita income growth. But this change might not come as we expect. Future growth in population and GDP, for instance, will be constrained in surprising ways-by rapid fertility decline as result of increased urbanization, productivity decline as a result of social unrest, and continuing poverty among the poorest 2 billion world citizens. Runaway global warming, too, is likely.

With heart, fact, and wisdom, Randers guides us along a realistic path into the future and discusses what readers can do to ensure a better life for themselves and their children during the rising turmoil of the next forty years.