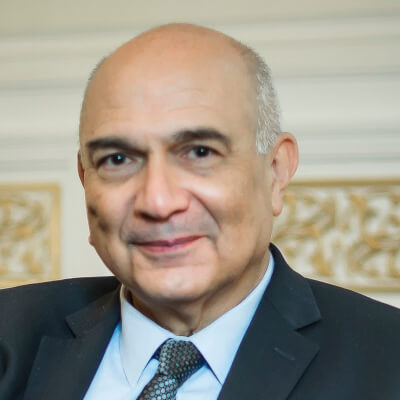 Mostafa Terrab is Chairman and CEO of the OCP Group, a global leader in crop nutrition solutions headquartered in Morocco.

OCP develops Morocco’s world-leading reserves of phosphorus – a vital element in all plant, animal and human life – into an increasingly-diverse range of products for farmers on 5 continents. Starting in 2006, he took OCP’s predecessor entity – a Moroccan state agency founded in 1920 – on a profound journey of transformation from a primary focus on mining with modest amounts of downstream product development to the world’s largest and most efficient producer in its field, recognized world-wide as a leader.  In the process, he and his team substantially grew both the equity value of the company and its revenues for its shareholders, notably the Government and people of Morocco.

As Chairman of the OCP Group, he oversaw the establishment of the Mohammed VI Polytechnic University, a Morocco-based, world-class research and teaching university that enjoys strategic partnerships with some of the most prestigious universities in the world, and aims to be a major driver of Africa’s economic development and diversification, and the strengthening of its human capital.

These accomplishments build upon a career that has bridged the public and private sectors, international organizations and academia for several decades.

From 2002 to 2006, at the World Bank, he served as a key advisor to developing countries – particularly in Africa – on liberalizing and diversifying their telecoms sector, at a time when demand for mobile phones was exploding in these countries. He also led the Information for Development Program (infoDev), a multi-donor research and incubation vehicle housed at the World Bank devoted to adapting new information technologies and services to the pressing needs of the world’s poor.

These efforts built upon his hands-on experience in Morocco from 1998 to 2002 creating, building and leading Morocco’s telecom regulatory authority and presiding over the liberalization of the mobile sector in Morocco, driving the process of awarding a record-breaking new mobile license. This critical contribution to Morocco’s own development built upon his prior 6 years of work as a member of the team of experts in the Cabinet of the late King Hassan II.

He earned Master’s and PhD degrees in engineering and operations research from the Massachusetts Institute in Technology after an engineering degree from the Ecole Nationale des Ponts et Chaussees in Paris. Early in his career, he worked for 3 years at Bechtel Civil and Minerals in San Francisco (1983-85), at the Draper Laboratory in Cambridge, Massachusetts (1988-1992) and as an Assistant Professor at the Rensellaer Polytechnic Institute (1990-1992).

He has been awarded the Wissam Alaouite (Order of the Alaouite) high honor by the Kingdom of Morocco, and the rank of Officer in the French Legion of Honor.