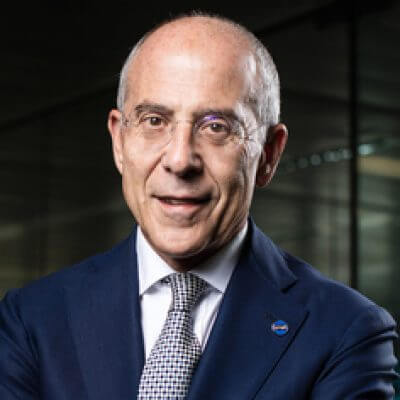 Francesco Starace has been Chief Executive Officer and General Manager of Enel S.p.A. since May 2014. He joined the Enel Group in 2000, holding several top executive positions. He served as Chief Executive Officer and General Manager of Enel Green Power, the Group’s renewable power generation subsidiary and a leading player in the global renewables industry. He began his career in construction management of power generation plants, first with the General Electric Group, then at ABB Group, and subsequently at Alstom Power Corporation where he was Head of Gas Turbine Sales Worldwide.

Since June 2014 he has been a member of the Advisory Board of the United Nations’ Sustainable Energy 4 All initiative. In May 2015 he joined the Board of Directors of the United Nations’ Global Compact. From January 2016 until January 2018 he was co-chair of the World Economic Forum’s Energy Utilities and Energy Technologies Community. In October 2016 he was nominated co-chair of the B20 Climate & Resource Efficiency Task Force. In June 2017 he was elected President of the European electricity industry union Eurelectric. The European Commission appointed him Member of the “Multi-stakeholder Platform on the Implementation of the Sustainable Development Goals in the EU” in September 2017. On 31 May 2018, he was honoured as the Cavaliere del Lavoro, following the signing of the decree by the President of the Italian Republic.

A graduate in Nuclear Engineering from the Polytechnic University of Milan, he is married and has two sons. He is a keen cyclist, a supporter of the A.S. Roma football club, and has a passion for poetry.