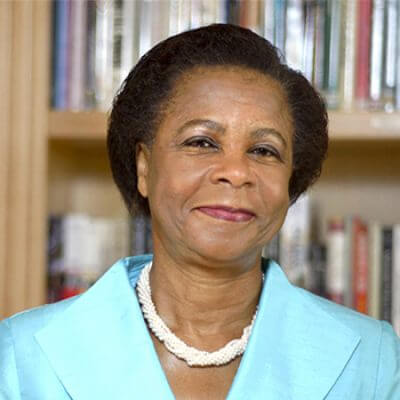 Dr. Mamphela Ramphele is Co-President of the Club of Rome since 2018. She has been a student activist, medical doctor, community development activist, researcher, university executive, global public servant and is now an active citizen, she was a founding trustee of the Nelson Mandela Foundation and is Chair of the Desmond Tutu IP Trust.

Previously, Dr Ramphele was Vice-Chancellor of UCT, one of four Managing Directors of the World Bank in Washington, DC and Leader of Agang SA, a party for all South Africans which won two seats in the national elections in 2014. She was also Chairperson of Gold Fields, Circle Capital Ventures (Pty) Limited, Technology Innovation Agency (TIA) and Director of Medi-Clinic Corporation Limited and Remgro Limited and founder of the Open Society Foundation for South Africa and the Citizens Movement.

Dr. Ramphele authored several books and publications on socio-economic issues in South Africa. She has received numerous awards for her work for disadvantaged people in South Africa and elsewhere.