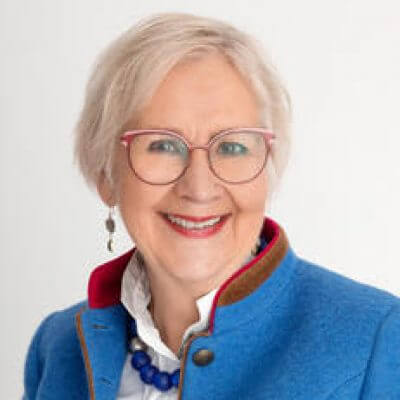 Dr. Kristín Vala Ragnarsdóttir is the rare combination of an academic and an activist. Her research, publications, teaching and activism focus on regenerating Earth from a system´s perspective. This includes natural resource availability and management, new economic thinking for the 21st century, and transformation literacy needed to regenerate a thriving Earth for nature and people. Her recent activity includes working with the CoR in preparation for the UN Food System Summit in 2021 and advising the Ecocide Law Alliance.

Recently, Vala was  a member of the Icelandic government´s 2050 Energy Policy Committee and she represents the Climate Council. She was involved in developing indicators for wellbeing for the Prime Minister´s office and in Iceland being awarded membership of the Wellbeing Economy Governments Partnership (WEGo). Vala has advised Iceland´s government on higher education, education for sustainable development, nature protection, genetically modified organisms, futures thinking and government policy plan. She was a member of the Strategic Planning Team for the future of Reykjavik and Green Tourism.

Vala was a member of the Bhutanese´s government´s International Expert Working Group on a New Development Paradigm that advised Bhutan´s contribution to the UN Sustainable Development Goals – with a focus on new indicators to go beyond GDP. She has advised on green policies in Iceland, Sweden, UK, Bhutan and China and on the European Commission´s Circular Economy Strategy. Vala led workshops in Bristol, UK, on visioning a sustainable city,  laying the foundation for Bristol becoming the Green Capital of Europe.

Currently, Vala is Advisor to Global Choices, she has served as a member of the Global Council and is an Ambassador for the Wellbeing Economy Alliance (WEAll) and Ecological Sequestration Trust. She served as vice-chair of the board of her local Red Cross and was a board member of the Women for New Constitution, Breiðdalssetur cience and cultural entre, and the Hallomsstadur sustainability school. Previous board memberships include The Balaton Group (Vice-president), Landsvirkjun energy company, Landverd nature conservation, Pyramid2030, 17Goals, Alliance for Sustainability and Prosperity (ASAP) and Initiative for Equality.

Vala is a Member of Academia Europaea, as well as the Norwegian Academy of Science and Letters, Icelandic Academy, and Royal Society of Arts and Letters (UK). She is a Distinguished Fellow at the Schumacher Institute (UK), and received their Award of Excellence Furthering Sustainability and Equality Learning. Other awards include Balaton Group Member of the Year, and the Times Higher Education Supplement (THES) Award for Outstanding Contribution to Sustainable Development.