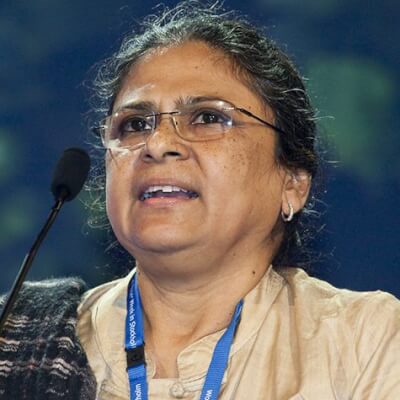 Sheela Patel is the founder director of the Society for Promotion of Area Resource Centres (SPARC), an NGO based in Mumbai, that has been working since 1984 to support community organisations of the urban poor in their efforts to access secure housing and basic amenities and seek their right to the city.

SPARC has been working in alliance with two Community Based Organizations – National Slum Dwellers Federation (NSDF) and Mahila Milan (women’s collectives in slums) that are active in 70 cities in different states of India. Since 1999, she has also been Secretary and Chief Executive of SPARC Samudaya Nirman Sahayak (SSNS), a non-profit company set up to assist slum communities take on construction projects in cities to provide slum dwellers to build homes and sanitation for themselves.

She is a founder amongst many of Slum Dwellers International, a transnational social movement of the urban poor in Asia, Africa and Latin America, whose board she previously chaired.

Patel is widely recognised – nationally and internationally – for seeking urgent attention to the issues of urban poverty, housing and infrastructure onto the radar of governments, bilateral and international agencies, foundations and other organizations. Among other things, Sheela was a Commissioner of the Commission for Adaptation to climate change between 2018-2020 and is currently a trustee of the International Institute or Environment and Development (IIED) and a Global Ambassador for Race to Zero and Race to Resilience.