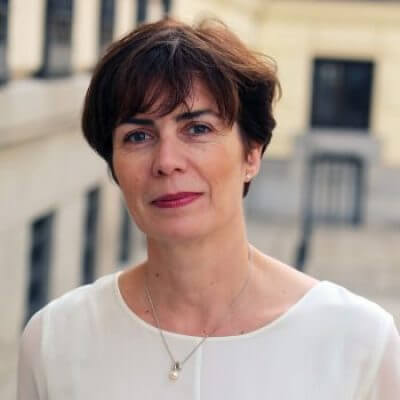 Cristina Manzano is editor-in-chief of esglobal, the main online publication on global affairs in Spanish. esglobal, the former Spanish edition of “Foreign Policy” magazine, aims to offer analysis on all sorts of international issues, in an original, attractive, innovative and rigorous way. She is a columnist for “El Periódico de Cataluña”, writes a blog for “The Huffington Post” (Spanish edition), and is a regular contributor to other Spanish and international media. She used to be a regular collaborator of “Hoy”, one of the leading analysis TV programs in Spain, at CNN+, until the channel was closed in 2011. She participates as speaker and lecturer in events and seminars on different topics related to international affairs – especially globalization processes, Spanish and EU foreign policy-, and philanthropy. Since 2016 she is the editor of “Pensamiento Iberoamericano”, a journal edited by the Iberoamerican General Secretariat (Segib). She has been Deputy Director of FRIDE, an independent think tank based in Madrid working on the EU foreign policy. Prior to that, she was Director of communications of FRIDE and of Concordia21, an umbrella foundation for the different organizations founded by Spanish philanthropist Diego Hidalgo. She holds a BA in Communication Science from Universidad Complutense de Madrid, and took postgraduate studies at the University of Maryland (US), thanks to a Fulbright scholarship. Before joining “FP”, she was for more than 10 years director general of Reporter, a leading firm in corporate communication and branded content. Manzano is a member of the European Council on Foreign Relations, as well as of the Scientific Council of Real Instituto Elcano. She is also member of the Board of the Education for Employment Foundation Europe (EFE Europe). She speaks Spanish, English and Italian, and has a good knowledge of French.