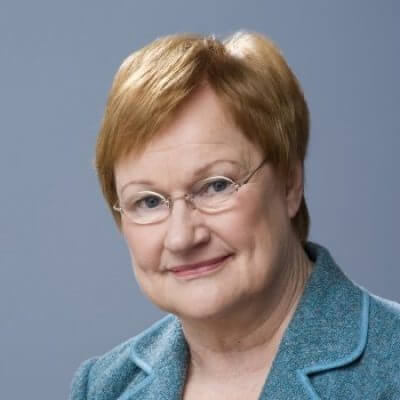 Her political career in Finland spans over four decades. She was elected to Parliament in 1979 and was reelected four times before taking office as President. She has also held several cabinet positions including Minister for Foreign Affairs. During her Presidency she served as co-chair of the United Nations Millennium Summit and co-chair of the UN High-Level Panel on Global Sustainability.

Halonen continues to work closely with the UN and other international organizations and networks. Among other positions she is currently the Co-Chair of the High-Level Task Force for ICPD, an alternate Co-Chair of the High-Level Advisory Group for Every Woman Every Child, a member of the Sustainable Development Solutions Network and a member of the Board of Directors of the Thomson Reuters Founders Share Company.