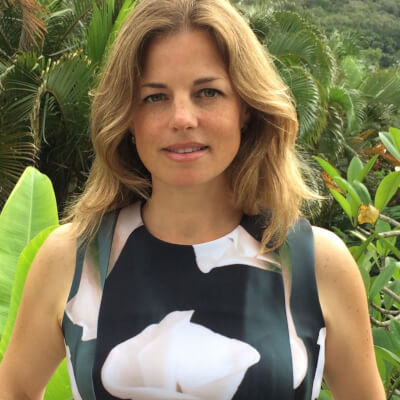 Celeste Connors has twenty years of experience working at the intersection of economic, environment, energy, and international development policy. Before joining Hawai‘i Green Growth, she was CEO and co-founder of cdots development LLC, which works to build resilient infrastructure systems and services in vulnerable communities. Celeste previously served as the Director for Environment and Climate Change at the National Security Council and National Economic Council in the White House where she helped shape the Administration’s climate and energy policies, including the Sustainable Development Goals (SDGs). Prior to joining the White House, Celeste served as a diplomat in Saudi Arabia, Greece, and Germany. She also held positions at the U.S. Mission to the UN, served as the Climate and Energy Advisor to the Under Secretary for Democracy and Global Affairs at the U.S. Department of State, and worked for City of New York.

Celeste is a Senior Adjunct Fellow at the East-West Center and was a faculty member at the Johns Hopkins University School of Advanced International Studies (SAIS) in the Energy, Resources and Environment Program. She holds an MSc in Development Studies from the University of London’s School of Oriental and African Studies (SOAS) and a BA in International Relations from Tufts University. Celeste has served on numerous boards including her current service on Hawaiian Electric Industries, the Global Island Partnership (GLISPA), the Institute for Sustainability and Resilience at the University of Hawaii and Icebreaker One. She previously served on the Board of America’s Service Commissions, the IUCN World Conservation Congress National Host Committee, and was a Term Member on the Council on Foreign Relations. Celeste grew up in Kailua, O‘ahu.